We have the incredible support of Ambassadors sharing their experiences and spreading the word about the work of the NDSPG. 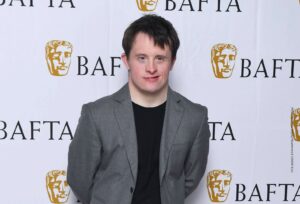 British Actor and campaigner, Tommy Jessop, became a household name when he hit our screens playing Terry Boyle in popular TV drama, Line of Duty. He was the first actor with Down syndrome to star in a prime-time BBC drama, BAFTA- nominated Coming Down the Mountain, following this with guest lead roles in Casualty, Holby City and other TV roles and radio plays for BBC Radio 4.

Tommy is the winner of various Best Actor awards for his short films including the ground-breaking film Innocence https://twitter.com/innocencefilm1 where he plays a dark lead role alongside NDSPG Founding Officer Beth Asher, redefining the representation of learning disability on screen. This impressive performance led to Tommy being the first actor with Down syndrome to be accepted onto the BAFTA Elevate Programme, and the first to be a full voting member of BAFTA.

In July 2021, Jessop received an honorary Doctorate of Arts from the University of Winchester for his services to the entertainment industry.

“I really am very proud and honoured to be an ambassador for the NDSPG because I really would like for other people to have the same chances in life and to have a voice and make other people really listen to and understand them as well.”

You can read more about Tommy here: https://www.tommy-jessop.com/ 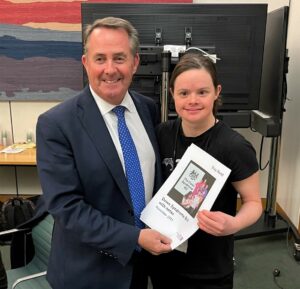 Florence is the female team captain of Down Syndrome Swimming GB, representing GB in several international competitions winning several medals, including bronze in the 50m butterfly at the European Championships in Sardinia in 2019.

Florence lives in London in supported living with 4 other young people with a disability. She holds down three part time jobs doing admin work as well as working once a day with Team Domenica in Brighton in one of their cafes. She travels everywhere independently.

In her free time Florence volunteers. She was a gamesmaker at the London 2012 Olympic Games and frequently volunteers at Battersea Arts Centre and at a local charity shop on a Saturday afternoon.

She also likes to cook, go to the cinema and travel.

Florence says, “I am honoured to join the NDSPG as an ambassador as I want to have a say in my future and make my own decisions. I want to live as independently as possible.

I want to help other people with Down Syndrome.

I want to join as I really love politics.” 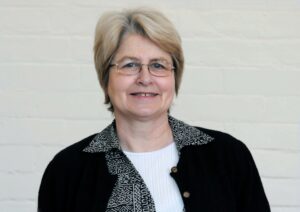 Sue Buckley is an internationally respected psychologist and Emeritus Professor of Developmental Disability at the University of Portsmouth where she taught and did research for 25 years. The research focussed on understanding how having Down syndrome affects the way children develop and learn to find the most effective ways to help them reach their full potential. From the start she has worked to ensure research findings reach families and are implemented in practice. Before going to Portsmouth, Sue started her work as a clinical psychologist in the NHS working in institutions for children and adults with learning disabilities. She worked with the government to move people out into community care and pioneered early intervention services for children and families in the community from the 1970s. Her research has focussed on speech, language, reading, memory, early intervention and education. Sue started the charity Down Syndrome Education International in 1986 based on work begun in the 1970s. She still works for DSEI as Director for Science and Research. Sue adopted a baby with Down syndrome, Roberta, from one of the institutions she worked in. Her experience as a professional and a parent is unique and she always says Roberta taught her more about living with Down syndrome than she taught Roberta, who sadly died in 2020 at the age of 51. Sue says she knows Roberta would want her to support NDSPG and share all she has learnt as a parent and a professional to change lives for the next generations. https://www.down-syndrome.org/ 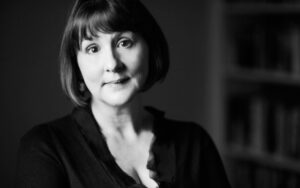 Heidi Thomas is one of the UK’s top screenwriters, and her career as a dramatist spans more than thirty years. Her stage work has been produced by leading theatres across Europe, including the Royal Shakespeare Company, and seen on Broadway.

Heidi’s award-winning scripts for the large and small screen include Cranford, Return to Cranford,  Madame Bovary, Ballet Shoes, I Capture the Castle, and Little Women. She also created and wrote the revived Upstairs Downstairs and the original BBC1 drama series Lillies. She is best known for the hit BBC/Neal Street Productions show Call The Midwife, which is now in its 12th season, and seen in more than 200 countries worldwide.

Heidi had the immense privilege of growing up with two wonderful younger brothers, Jonathan and David. David happened to have Down syndrome, and lived a short but intensely happy life at the heart of his loving family. Heidi says:

“Growing up alongside a sibling who had Down syndrome was the greatest gift I ever received, and I have never forgotten my funny, affectionate, wise little brother. Over the years I have written a number of on-screen roles for characters who have the condition, including Reggie in Call The Midwife (played by Daniel Laurie) and Lady Pamela Holland in Upstairs Downstairs (portrayed by Sarah Gordy). I love working with such talented actors, and creating positive, illuminating stories about people with that magical extra chromosome!

I am so proud to be an Ambassador for the National Down Syndrome Policy Group, and am excited to see what the future holds for this dynamic and inspiring community.” 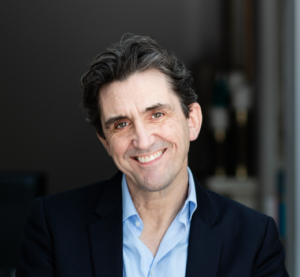 Stephen McGann is a leading UK actor who has worked extensively in British theatre and on screen for almost 40 years. Since 2012, he has starred as the much-loved GP Dr Patrick Turner in the global hot TV series Call the Midwife.

Stephen is also a noted public speaker and author, focussing on the role of science and medicine in popular culture. He has appeared at the Cambridge, Cheltenham, Oxford and Imperial Science festivals, and has written two companion volumes to Call the Midwife – Doctor Turner’s Casebook, and Call The Midwife – A Labour of Love. Has also published an acclaimed memoir entitled Flesh and Blood – A History Of My Family In Seven Sicknesses.

Steve says “I first became involved with the National Down Syndrome Policy Group during their brilliant campaign to promote the Down Syndrome Bill. It was a genuine thrill to cheer the team on as the Bill made its journey through Parliament. Spending time with so many exceptional young people and their families has really opened my eyes to the needs and gifts of those who have Down syndrome. It’s an absolute pleasure to support them all.”

We use cookies to ensure that we give you the best experience on our website. If you continue to use this site we will assume that you are happy with it.I agree