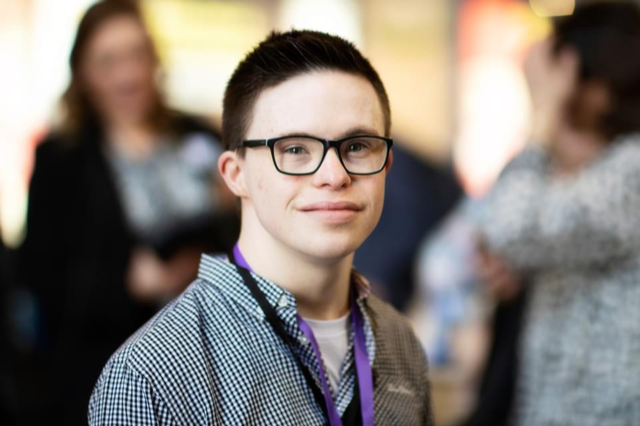 The Bill becomes an Act!  View our press release on the Bill receiving Royal Assent.

‘THE FIRST OF ITS KIND: HISTORIC & GROUNDBREAKING DOWN SYNDROME BILL IS SET TO BECOME LAW’

A Bill focused on improving the lives of those living with Down syndrome is expected to clear its first Commons hurdle today (Friday 26th November) after the Government announced it will support it to become law.

The Down Syndrome Bill has been introduced as Dr Liam Fox’s Private Member’s Bill.  Dr Fox was selected, for the first time in his thirty years as an MP, in the Private Members’ Ballot to bring forward a Bill of his own choosing for this Parliamentary session – only twenty MPs each parliamentary session are drawn at random in the ballot.  Dr Fox, a former NHS Doctor and GP, decided to use this unique opportunity to bring forward the ‘Down Syndrome Bill’ as his Private Members’ Bill.

The Bill is co-sponsored by cross-party MPs and politicians from across the political divide attended an event with Dr Fox in Parliament earlier this week in support of the Bill.

The Down Syndrome Bill would mean the establishment of a Down Syndrome Act and will be the first of its kind in the world.  The Act would improve the provision and outcomes for all those living with Down syndrome in England.  This will encompass, amongst other areas, maternity care, education, health & social care and employment.

Campaigners are calling for the Bill to receive Royal Assent before World Down Syndrome Day on 21st March 2022.

TV Personalities have also shown their support for the Bill, including: CBeebies presenter and self-advocate George Webster; BBC’s Line of Duty actor Tommy Jessop; writer and creator of Call the Midwife Heidi Thomas; and the actress Sally Phillips.

The National Down Syndrome Policy Group (NDSPG) has launched a campaign in support for the Bill.  The ‘Stand Up for Down Syndrome’ campaign includes a Change.org petition which has attracted the signatures of 30,400 people with Down syndrome, their families and supporters.

Thousands of constituents have written to their MPs as part of the campaign urging them to support the Bill.

Many of those taking part in the campaign have shared photos of their children with Down syndrome on social media to help send a strong message about the importance of the Bill.

The NDSPG have organised a gathering outside Parliament today (Friday, 26th November) at 13:30hrs so that those in the Down syndrome community can publicly demonstrate their support of Dr Liam Fox’s Bill on the day of its second reading in the House of Commons.

If the Bill passes Second Reading in the House of Commons, which it is expected to do so, then Battersea Power Station in London will be lit up in blue, pink, purple on Friday evening – to celebrate this historic and ground-breaking moment.

George Webster, CBBC presenter and one of the Founding Officers of the NDSPG said:

“We are all very excited that Dr Liam Fox is sponsoring a Bill with the aim of improving the lives of people living with Down syndrome.  I would like to see the Bill becoming law, then I think everyone like me with Down syndrome will get better healthcare, more access to services and be more included in society. It is possible. It happens for some now, but it shouldn’t be a lottery.”

“Everyone needs help now and then. We just need chances in life like anyone else.”

Heidi Thomas, Writer and Creator of Call the Midwife whose late brother had Down syndrome said:

“Having David as a sibling enabled me to live my best life – he taught me so much, and brought joy to all who loved him. But I want everyone who has Down syndrome to live their best life, with their gifts acknowledged and their specific needs embraced, understood, and enabled. The Down Syndrome Bill could really open the door to that, and it has my full support.”

“The Down Syndrome Bill is essential to address the specific deficiencies and barriers faced by people who have Down syndrome and we hope that MPs across all parties will vote for this Bill. We will work hard to support any information needs those politicians may have to ensure they are fully informed about the issues before the vote.  Societal infrastructures need to be in place to progress the rights of this community.  When enacted we will finally have legislation to ensure every stage in the lives of these people are protected and enhanced.  Only through this can people with Down syndrome achieve their rightful place as recognised individuals, contributing towards a better, inclusive society.”

The first reading of the new Down Syndrome Bill

We would like to engage with local support groups up and down the country. Please get in touch.

With the incredible news that Dr Liam Fox MP has tabled a private members bill entitled the Down Syndrome Bill, we have a lot of very exciting work ahead of us! The second reading of the Bill will take place on 26th November and ultimately we hope the Bill will become an Act of Parliament early in 2022. The Act will require the Government to form a strategy addressing the needs of people with Down syndrome and we intend to be deeply involved in the consultation process, together with the All Party Parliamentary Group for Down Syndrome, which was launched on Wednesday 12th May 2021.

Play Video
Absolutely delighted to announce the launch of the Down Syndrome Bill. Hear more from our trustees.
Play Video

A Down Syndrome Bill is to be introduced to Westminster by Dr Liam Fox MP in the next Parliamentary session later this year. If successful, it will lead to the establishment of a Down Syndrome Act and a national strategy to improve provision and outcomes for all those living with Down syndrome in the UK. The Autism Act which became law in 2009 preceded the establishment of the national strategy to help meet the needs of adults with autistic spectrum conditions in England. The Down Syndrome Act will go further, identifying needs in all areas, for all individuals with Down syndrome across the whole of the UK.  This will encompass, amongst other areas, maternity care, education, health, social care and employment.

The National Down Syndrome Policy Group, in coalition with the All-Party Parliamentary Group for Down Syndrome, has been lobbying for the long overdue Down Syndrome Act and have released a film featuring trustees who have Down syndrome, highlighting some of the areas where they hope to see positive change in the future.

“My aim is to deal with three main areas.  The first is to de-stigmatise Down syndrome and to re-educate both the public and professionals about the advances, including in life expectancy, that have occurred in recent decades.  The second is to ensure that current provision of services is improved, whether provided by health, education or local services, by ensuring that providers give due consideration to those with Down syndrome when designing service provision.  The third is to look ahead and deal with future issues, such as long-term care, in an era where, for the first time, many of those with Down syndrome will outlive their parents.  By giving due thought to the issues today we can prevent avoidable human tragedies in the future.”

“A Down Syndrome Act. Why didn’t we think of this before?!”

“We are all very excited that Dr Liam Fox is sponsoring a Bill with the aim of improving the lives of people living with Down syndrome.”

“I would like to see the Bill becoming law, then I think everyone like me with Down Syndrome will get better healthcare, more access to services and be more included in society. It is possible. It happens for some now, but it shouldn’t be a lottery. “

“For too long the voice of the Down syndrome community has not been heard. We are delighted that the Down Syndrome Bill will enable engagement to secure and safeguard the rights and ambitions of the community across all aspects of society.”

“Having lobbied hard for this opportunity, our group will be fully behind Dr Liam Fox and the Down Syndrome Bill on its journey through Parliament, in line with our aim of raising the profile of issues affecting people with Down syndrome, their families and carers.”

BBC’s Line of Duty star Tommy Jessop is backing the launch of the new All-Party Parliamentary Group (APPG) on Down Syndrome, which will be launched at an inaugural meeting at Westminster tomorrow. A number of Down syndrome advocacy and support groups along with a cross-party group of MPs, led by SNP MP Dr Lisa Cameron and Labour MP Matt Western, have come together to launch the new All-Party Parliamentary Group on Down Syndrome.

APPG members will be supported by the newly-formed National Down Syndrome Policy Group in the Secretariat role. The policy group is comprised of interest groups and individuals who have Down syndrome, therefore linking the parliamentary group to others with knowledge of the issues important to the wider Down syndrome community.

“I welcome the new All-Party Parliamentary Group for Down Syndrome. I hope this will raise awareness of people living with Down syndrome and who we really are so that we really do have a voice to speak up for ourselves and other people”.

“I want to see people with Down syndrome treated equally with others before and after they are born. We are the only group of people in the UK where people try to end our lives before we are born just because we have Down syndrome. This is not fair. It scars our lives and causes mental health problems”.

“We hope that the members of the All-Party Group can use their powers and their energy to help make positive change for people like me and my husband James who has Down syndrome”.

“I was delighted to be asked to join the new All-Party Parliamentary Group on Down Syndrome, and to become a Vice Chair. People with Down Syndrome deserve a strong voice in Parliament to stand up for them and their families, and to press for greater support to help with the child’s development and for the family”.

“I’m so delighted to support the All-Party Parliamentary Group for Down Syndrome. I am all in favour of action to ensure people with Down syndrome lead healthy, active and independent lives – that their talents are recognised and their voices heard”.

Nicola Enoch from the National Down Syndrome Policy Group said: